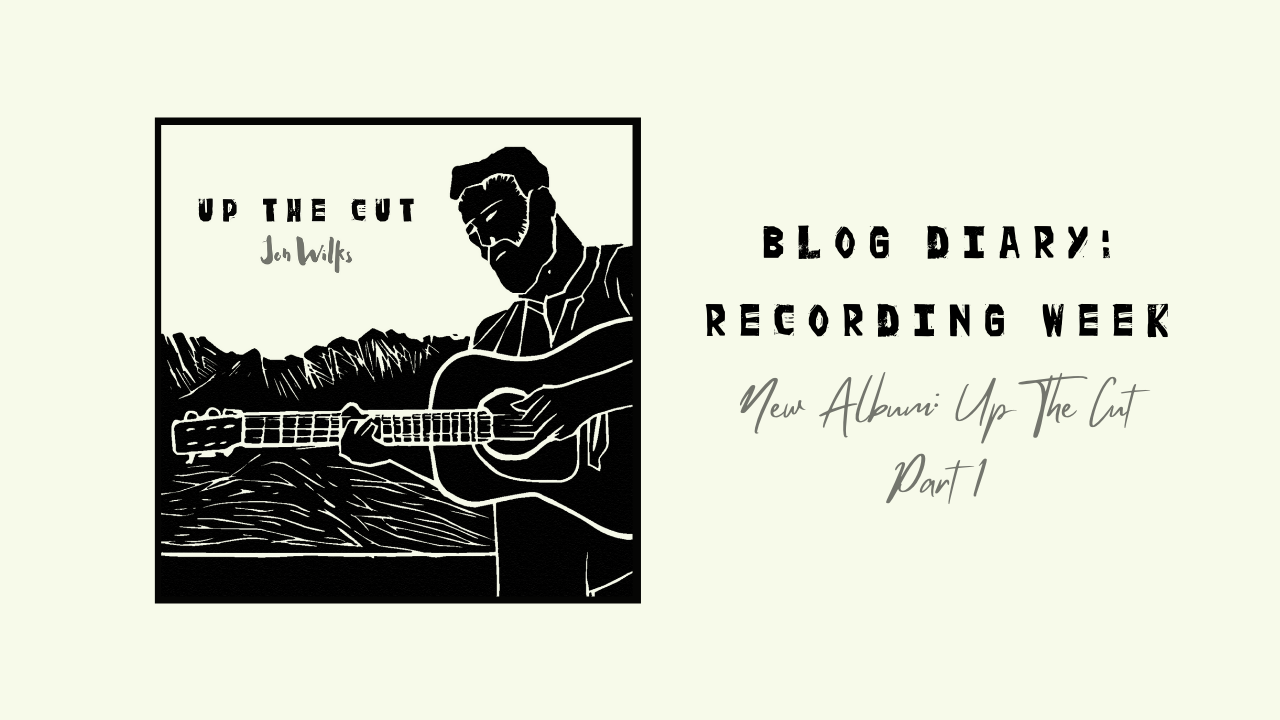 It’s not much of a secret, but I’m about to start recording my third solo album. Up The Cut, as it will be called, has been lingering now for so long that it has an album cover, most of the track listing, and a good many of the other things that a completed album usually has. All that’s missing are the tracks themselves. But we’ll get to that shortly.

This little series of diary entries is as much for me as it is for you. Each time I’ve had reason to reflect on my previous recordings, the process that led up to their release entirely escapes me. My memory is poor at the best of times, but when it comes to remembering how I did things in the studio… a complete blur. Sometimes it’s nice to have a little record of these things, so here goes.

Today is the first day of recording week. I’ve taken time off my day job to get this done. It’s the only way to get things done. Day-to-day life is so full of various demands on my time and headspace that recording bits here and there, in the spaces in-between, results in… mess. I know this because my computer hard drive is full of… mess. About 12 month’s of mess, to be precise, as that’s how long I’ve been trying to record the album that will become Up The Cut. Until now, I’ve largely been trying to record it alone. I must have 30-40 takes of some of the tracks, none of which I know what to do with. It has been the most frustrating record to make, partly due to stop/start decisions on production ideas, and partly because it’s just me at the controls, and I seem to have lost the ability to make decent judgements.

After attempting to make a Midlife Part 2, I finally realised I wasn’t allowing the songs the space to be themselves. Only a few of them required the full kitchen sink, while the remainder seemed to be enjoying life quite well enough as simple acoustic guitar and voice pieces. During lockdown I became used to playing them during online gigs in this way, and I eventually came to the conclusion that all they needed was a nice-sounding room, some good mics, and a sympathetic producer/engineer to tell me when to stop torturing myself.

Only two tracks survived from the initial Midlife 2 sessions (note: it never had that working title – I call it that here so that you can understand the aesthetics I had in mind). I couldn’t see a way to do them with the simple, unadorned approach I intend for Up The Cut, so I put them out last week on a standalone digital single. These were ‘Mary Ashford’s Tragedy‘ and ‘The Sausage Man‘. With both of them now fully released, I feel I can draw a line under that particular sound and move on to whatever this week will bring.

I commonly record things on my own, however, as I mentioned above, the process now seemed to be failing me. The guitar and vocal arrangements, while paired down, are still too intricate for me to be able to operate the recording machinery, or think about whether I’m tripping into distortion levels, or whether it’s even working as an overall sound. This time, I felt I needed to be able to concentrate on the 10 remaining songs and get the best performance possible. So I’m heading off to Yaxham in Norfolk to record at Slow Worm, the studio owned and run by Tom Moore.

To people in the tradfolk world, Tom’s pedigree is well known. Not only is he a celebrated folk musician in his own right (Moore Moss Rutter, False Lights), he’s also in great demand as a producer (Nick Hart, Dominie Hooper, Mikey Kenney). So, I know I’m in good hands. I head up there tomorrow (providing Boris Johnson doesn’t throw the country into lockdown again during this evening’s scheduled press conference – he did that the last time I tried to go off on a folkie jaunt).

Today, therefore, is the last day of rehearsals. I’m writing this during a break over lunchtime. The songs for the album are, once again, related to Birmingham and the Midlands, and they include the following (in no particular order): ‘The Stowaway’ [Roud 6341], ‘Little Grey Oss’ [Roud 393], ‘John Riley’ [Roud 270] (all three learned from the singing of George Dunn), ‘The Pretty Girls of Brummagem’ [Roud V1691], ‘How Five And Twenty Shillings Were Expended In A Week’ [Roud V1598], ‘The Jovial Hunter of Bromsgrove’ [Roud 29] (all three learned from facsimiles of a song collection put together by Roy Palmer), ‘The Tramp’s Philosophy’ [Roud 10672] (learned from a book called The Black Country, by Phil Drabble, and also from a fragment recording sent to me by Steve Roud), ‘The Cruel Mother’ [Roud 9] and ‘The Lover’s Ghost’ [Roud 179] (both learned from the singing of Cecelia Costello).

I’m also taking a properly miserable Christmas broadside (printed in Birmingham in the mid-19th century) – very well-known but suitable for singing with all the dark delight that 2020 can muster. We’ll see if we get that down well enough to tell you more about it. I can’t quite decide.

A quick note on the title and the album cover. The latter came first. During the first part of lockdown, my friend and Grizzly Folk partner, Jon Nice, took up linocutting. He proved surprisingly good at it, and he sent me a cut of myself strumming a guitar. I was totally taken with it, so I asked him to send me a version that could be made into an album cover.

At the same time, I was toying with potential album titles, knowing that I’d be wanting to release what I’d done eventually. Up The Cut was a phrase I’d read in books about the cultural history of the Midlands. It means “up the towpath”, referring to the area’s many waterways, and could be taken literally (“he’s gone up the cut to the town centre”) or in a more euphemistic manner (I can think of a number of ways). Sitting looking at Jon’s linocut, the phrase popped into my head again and I realised the two were meant for each other.

The album, I should mention, is due out in time for Christmas. I don’t want to jinx it further, so I’m not going to put a date on it, but… all being well… I’ll have it up for pre-order on CD in the very near future.

So… that’s what’s happening this week. I’d best get back to fingerpicking practice. I’ll keep you updated.

Categories:Folk music writing Up The Cut