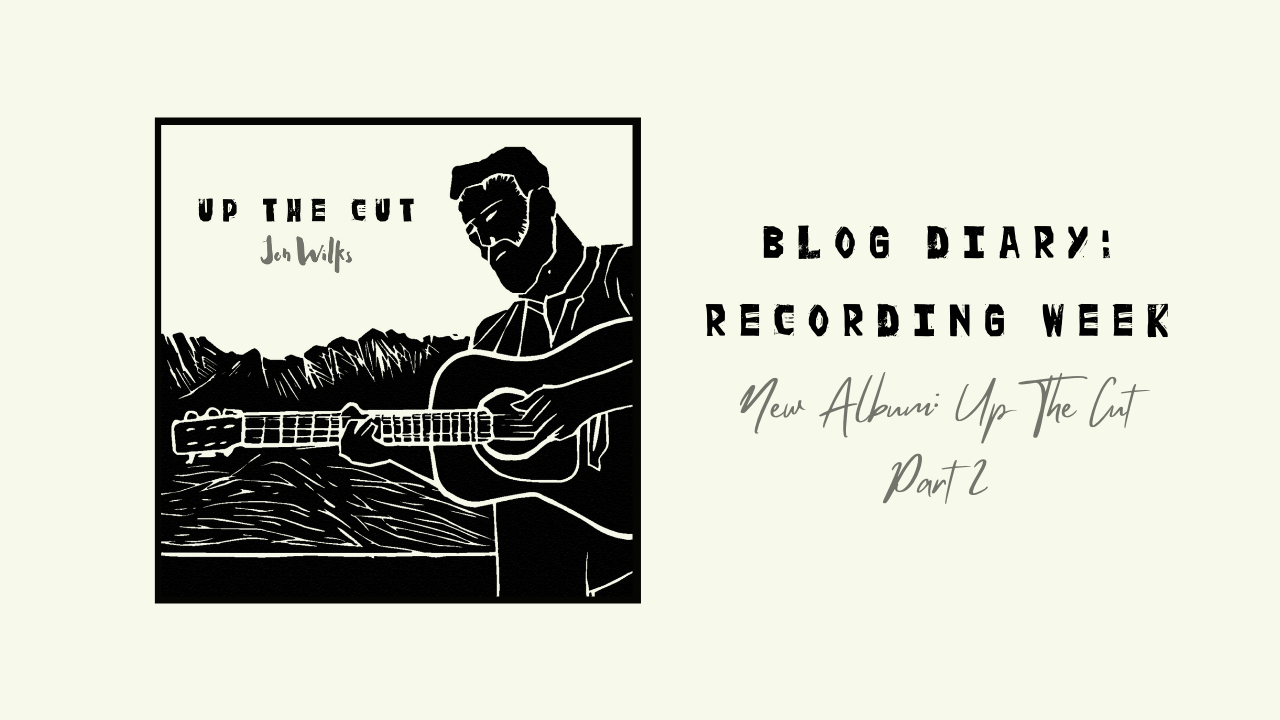 I arrived at Tom Moore’s Slow Worm Studios last night around 4pm. It’s a beautiful building at the back of a large house down a long, rural lane in Yaxham, Norfolk. Tom has done an amazing job with this place. The building’s outhouse serves as a studio control room, and he’s built a live room extension – beautiful timber frames, tonnes of natural light flooding in through soundproof glass panels. A joyous place to be, where the weather can really play a part in the natural mood. Come here in the winter, and you could make a really dark, blustery record. In the summer, I’d imagine gorgeous, breezy music dancing on the light.

On arrival, I was met by my lovely friend and tradfolk brother, Nick Hart. Nick recorded his latest album (Nick Hart Sings 10 English Folk Songs…?!) at home during lockdown, and he was at Slow Worm to do some final additions and mixes. It was a real pleasure to hear what he’s done – it’s pretty far out compared to his first two albums. I’d love to say more, but I feel I ought to keep schtum until he’s ready for you to hear it en masse.

They were tidying away the last few mixes when I arrived, so I hovered in the background, taking photos and drinking the first of a thousand cups of coffee. With his album in the can, we ordered a celebratory curry, and then Tom, Nick and I got the instruments out and sat around in the studio until the early hours playing tunes. For such a well-known fiddle/viola player, Tom is surprisingly gifted on the guitar. Nick, being no less of a multi-instrumentalist, mostly stuck to his miniature banjo.

Nick left this morning, just after 9am. Tom and I started work at around 9:30am. He has the ears of a pro-sound engineer, so he spent the first 45 mins or so pacing around me as I played a couple of songs, picking out the perfect spot for setting up the microphones. He used a ribbon mic and condenser mic combination on my vocal, two more condensers on my guitar and then a couple of vintage 60s room mics about two metres away from where I was sitting.

I took a few notes between songs, and we rattled through about four before lunch. We started with ‘The Pretty Girls of Brummagem’ [Roud V1691], which we got on the second take (not counting a couple of false starts). Tom described it as “the Brummie Penny Lane“, as it lists a whole load of characters in and around New Street. It’s a great comparison, even though it was most probably written around 130 years before McCartney’s song, and it got me thinking a bit more about the nature of the album we’re making. This is an album of character songs, each and every one being portraits of some kind or another. In this song alone, you have dandies, shopkeepers, chimney sweeps, lovelorn old men… it’s a great starting point for an album that goes on to meet ghosts, drunkards, rowing couples, witches, knights, murderous fathers, sailors and philosophical tramps.

We continued with ‘John Riley’ [Roud 270], which we got in two takes but plumped for the first for its freshness. Then we tried ‘The Jovial Hunter of Bromsgrove’ [Roud 29], which I’ve released previously as a digital single on Bandcamp but wanted a tighter, more driven version for this album. A couple of false starts, and we had this one in the bag on the first complete take.

Obviously we were working fast and, as you’ll eventually hear, certainly weren’t going for perfection here. I’m not a wonderful singer at the best of times, so the main aim was to get something that really brought atmosphere to the storytelling aspect of the songs and breathed life into a handful of traditional songs that most people will never have heard before. In recent months I’ve started to notice a change in my voice anyway. I don’t hit higher notes easily anymore, even when warmed up, and even some of the notes within my register seem to vanish without warning. Maybe it’s the effects of too much coffee. That’s not to say it’s a bad set of vocal performances, but it’s certainly not radio-friendly. And that suits me fine. On the one hand, I don’t expect anyone to play it on the radio, and on the other… well, I give you Bob Dylan as Specimen A when it comes to the need for “perfect vocals”.

One of the great things about working at Tom’s place is the quality of food. His folks cook up a wonderful array of things for their house guests, and today Tom knocked together a battered fish-finger sandwich with minted peas and leaf salad. I don’t ever feed myself particularly well, so to have something that tasted like great pub grub while working in a wonderful studio…

Lunch over, we went back to work on a few more songs. We got ‘The Tramp’s Philosophy’ [Roud 10672] on the first and only take (much easier to do, as it’s completely unaccompanied), and we banged out versions of ‘Little Grey Oss’ [Roud 393] and ‘The Cruel Mother’ [Roud 9] throughout the remainder of the afternoon. We’ll have to revisit those tomorrow, I think. My voice was getting pretty tired by that point, and they weren’t coming easily. I think we had two or three attempts at each before moving on.

The last song of the day was a version of ‘God Rest Ye Merry Gentlemen’ [Roud 394], which had all the world-weariness that this year could pile upon it. We got it in two takes, the first being in the key of D (too low; too miserable) and the second somewhere around E-flat (slightly more sprightly, but not taking the piss). Listening back, I couldn’t believe how old and grizzled it sounded. The song has always fascinated me due to its austere melody – hardly the stuff of jingling bells and fairy lights – and I think I got it down nicely. Imagine Scrooge, but with an extremely limited vocal range and rapidly darkening mood.

Dinner was another of Tom’s creations, this time an extraordinary pad Thai. I think I like it here.

Categories:Non-music writing Up The Cut