But it’s in the heart of the Japan Alps that the phrase fits once again. I’m on a fraying bus, rattling along the road between Shin-Shimashima Station and Kamikochi, trying hard to ignore the taped, shrill voice of a woman that loops on the bus Tannoy. She’s imploring me to enjoy the views of the astounding countryside, and to be fair, she has her work cut out: of the five or six passengers, I’m the only one still awake. It’s not so much the beautiful views that hold my rapt attention, however. It’s the abundance of cookie cutter Alpine restaurants and lodges that line the roadside, each looking as though the blueprints were copied from a Heidi picture book, not one demonstrating any architectural familiarity with the country we’re in.

It’s a phenomena that continues the next day when my guide begins to speak proudly of Walter Weston, ’the grandfather of Japanese mountaineering’. Weston was a British missionary who spent years wandering around the Honshu mountains during the Meiji period, often attributed (mistakenly) with having given the Japan Alps their name. He’s referred to here with the same reverence most mountaineers might reserve for Hilary and Tenzing, so when I wonder out loud if his pedestal might not be doing a disservice to the thousands of Japanese folk whose lives were spent hobbling around the upper echelons of this spectacular region prior to Weston’s arrival, my deliberations are met with a kind of disbelief. Clearly this is not the place to ponder the philosophies of Michael Palin. 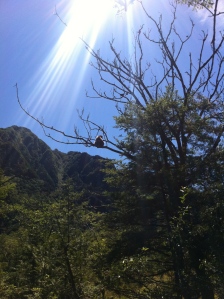 That said, there’s precious little else to do in Kamikochi beyond pondering and wandering, which is precisely what makes it the perfect weekend escape from Tokyo. Not that this is a groundbreaking revelation; Tokyoites have been coming here for the best part of a century, at one point arriving in such heavy numbers that most of their weekend was spent in the car, sitting in a traffic jam (photos from the Showa era make it look like hell on a mountainside). It’s still busy, of course – arriving and departing require careful planning – but the mid-’90s decision to make Kamikochi car-free means that the area has flourished in a far more attractive way. During our hike, our guide explains that he carries a Japanese machete as protection against bears, an indigenous population that is pleasingly on the up.

These days, visitors to Kamikochi tend to arrive on the rickety bus. Leaving their cars at Sawando, the nearest settlement, they line up in vast numbers to be transported to the village centre where, it must be said, the local architecture takes on a more Japanese aspect. Calling it a village might be too much, in fact – it’s little more than a collection of hotels and souvenir shops huddled around a particularly popular rope bridge (Kappa Bashi) – but its location is mesmeric. Seated at the foot of the Hotaka mountain range, it is naturally protected from human interference (its designation as a national park in 1916 helped fend off would-be developers) and summer typhoons (they don’t tend to scale the 3,000m summits successfully).

That’s not to say the area doesn’t suffer from extreme weather; between November 15 and April 27, the roads and hotels are closed in anticipation of heavy snow. ‘I came up here once at the dead of winter,’ a young worker at my lodge told me. ‘It was amazing. Nobody was here, just me and the mountains…and the snow. It was so deep, the taxi driver wouldn’t come much closer than Sawando. I had to hike the rest of the way.’ If he hadn’t actually seen The Shining, this guy had at least partially lived it.

Travellers to Kamikochi can expect a good selection of hikes, varying between the simple to challenging, each guaranteed a breathtaking series of views that change according to the season. By the time the area shuts down in November, it has already become a snow-lover’s ideal vacation, while the summer season is attended by glorious azure skies. Whichever time of the year you choose to visit, it’s well worth contacting the local travel bureau (see the Sacred Kamikochi link below) and trying to arrange a hike with Kazunari Ohukara, a septuagenerian who has been hopping around in the Kamikochi hills since he was 18. As mountain men go, he’s a peach, albeit one with sun-bruised skin and a tendency to chase wild monkeys mid-sentence.

With Okuhara-San as your guide, every tree has a story. He wears his deep love for the area on his sleeve, and no bridge is crossed without the old man turning and promising it a return visit, bidding it a fond farewell as he would any old friend. Sounds mad? Eccentric, certainly. When I ask him which his favourite peak is, he tells anyone who’ll listen that he has climbed Mt Roppyaku 220 times. Then he turns towards the peak and breaks into a loud serenade, ending with what may be a failed attempt to get a decent echo going. Suffice to say, he leaves an impression.

Returning to the real world from all this would be a shock to the system, were it not for the Tokyo-esque bus queues that great you at Kamikochi bus station. These can last for hours on end, so the best thing to do is head over there after breakfast (or as soon as you arrive, if you’re on a day trip), and get a ticket for a specific bus. You’ll need the ticket itself plus a numbered boarding ticket to ensure you’re booked youself a seat. Once this is done, make the most of the time you have in the area. From the active volcano, Mount Yakedake, right along the river to the Kamonji-Goya hut, where fresh iwana (river trout) are prepared in the traditional fashion, it’s easy to see why Kamikochi has become so beloved of Japanese holidaymakers. If only Michael Palin had stopped off here instead.

Kamikochi has accommodation for all budgets. With rates starting from ¥8,000 (per person) per night, Kamikochi Nishi-Itoya Sanso is a very reasonable deal indeed. The inclusive meal is excellent (Kamikochi does very well generally in the culinary department, making good use of the fresh ingredients found in the region) and the staff are friendly. The shared bathtubs may prove overwhelming for many foreign visitors, but they are segregated and have decent instructions on bathing etiquette in English. Elsewhere, the Kamikochi Gosenjaku Hotel offers a slightly more refined stay, with rates starting from ¥28,000 per person. If these prices seem steep, the camp site offers decent facilities. Special offers, booking in English and general visitor information can be found at the Sacred Kamikochi website.

While your hotel will most likely provide you with a decent dinner and breakfast, the river trout at Kamonji-Goya (about an hour’s hike from Kappa Bashi) is not to be missed. The fish is prepared over the flames of a traditional irori fireplace, and visitors get the chance to peruse Walter Weston’s remaining effects – specifically his ice pick and rifle, both of which hang from the wall.

How to get there

Kamikochi is not accessible by car, though it is a relatively easy (if not overlong) trip from the capital. The Tokyo to Kamikochi trek starts at Shinjuku, where the Azusa trains run through to Matsumoto in Nagano Prefecture – the journey is a little shy of three hours long. From Matsumoto, take the Dentetsu Kamikochi line through to its terminus at Shin-Shimashima Station (approximately 30 minutes), before changing to the Kamikochi bus, which takes a fairly spectacular hour-long route around (and even through) some of Japan’s highest peaks. Ahead of your return journey, be sure to collect a numbered boarding ticket several hours before you plan to depart.

First published in Time Out Tokyo.