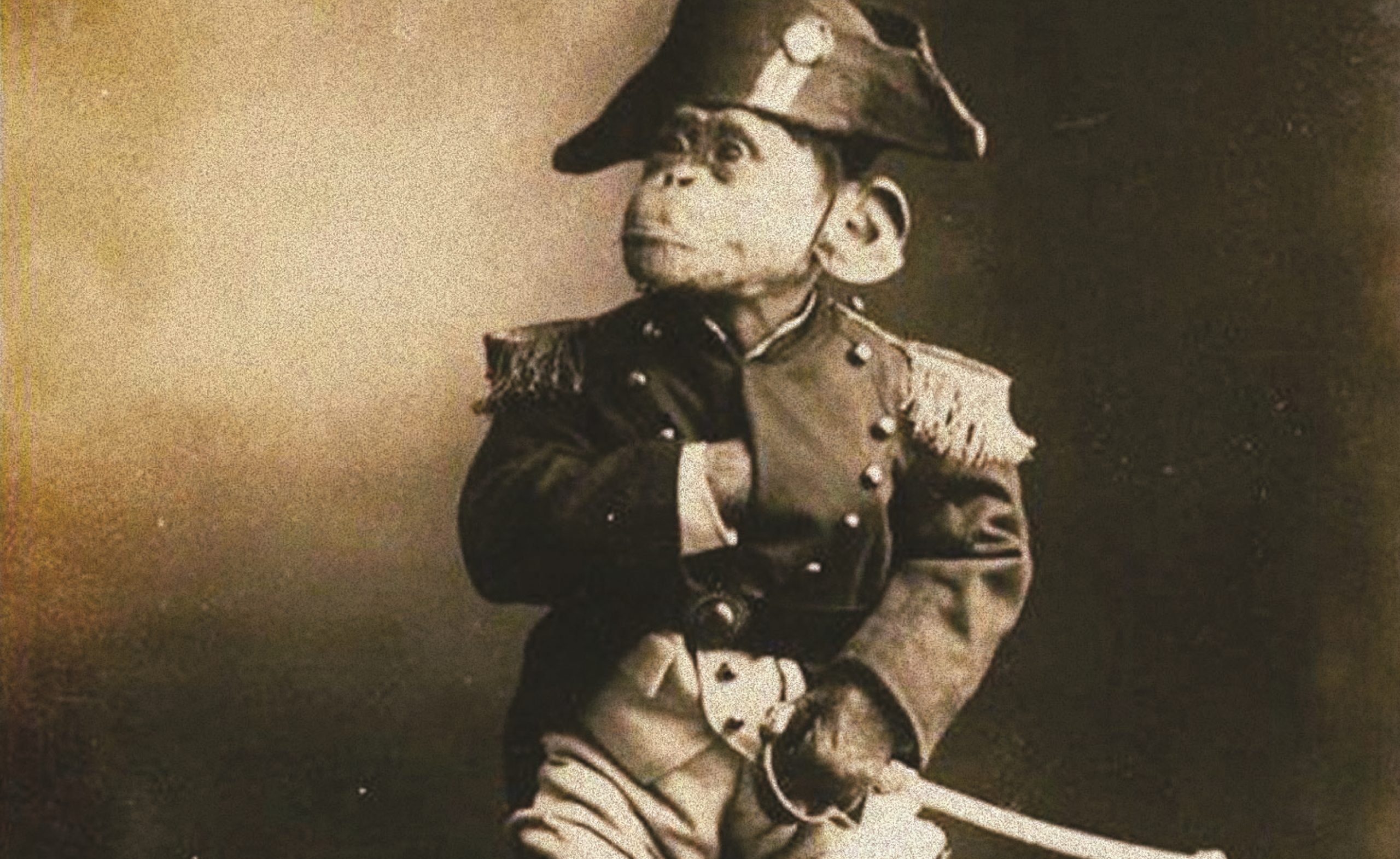 Who Hung The Hartleypool Monkey? Exploring the song behind the story

Who Hung The Monkey deals with the tale of the Hartlepool monkey (named Pug in this song) that washed up on a beach during the Napoleonic Wars and was hanged by the locals for being a French spy. An easy mistake to make, it seems, especially if you’ve seen neither a monkey or a French spy.

Again, I found this song in a Roy Palmer collection, this time Everyman’s Book of British Ballads (1980). There’s no story attached to the collecting of this number as it’s not a traditional folk song handed down in the aural tradition. It seems to have been found in Hartlepool Public Library, having been written by one Ned Corvan (more of whom later). All we know is that when he performed the song, it was at the Dock Hotel Music Hall, and it was greeted, “with immense applause”. Rightly so, in my opinion. It’s a gem.

Who hung the Hartlepool monkey… seriously?

The tale of the hanged monkey is well-known in its immediate locale, and to anyone who has had anything to do with Hartlepool FC (nickname: “The Monkey Hangers”). But is it true?

According to historian, Keith Gregson (and biographer of Ned Corvan), the likelihood is that the Hartlepool monkey legend actually originated in the song, and the song itself may have been heavily influenced by a similar song from Aberdeenshire. Corvan travelled the Scottish Lowlands with the concert hall singer, Blind Willie Purvis, and it seems slightly too great a coincidence that a song, possibly in Purvis’s repertoire, also dealt with the tale of a monkey washing up on Boddam beach, and suffering the same fate (“And the Boddamers hung the Monkey, O!”)

This take on things would also put paid to the idea that the monkey in the story is actually a “powder-monkey” – a boy onboard the ship who dealt with gunpowder. Let’s face it, it’s a sinister tale whichever way you look at it.

A note on Ned Corvan

Ned Corvan, the author of the song, is worth a quick mention. A Tyneside singer and songwriter, his songs were generally known for having been written and sung in the local dialect. My apologies, therefore, for having sung Who Hung the Monkey? in a decidedly un-Tyneside accent. There’s only so far you can go before you slip into parody.

While he was known specifically for his abilities as a comic singer, his songs tended to have a socialist edge. He gave money from his performances to seafarer charities and he was said to have performed not only for the local workers, but also “on behalf of them“. Something of a pioneer, he also included live drawing in his renditions, chalking up portraits of local figures as he sang about them.

Ned Corvan died of tuberculosis on August 31st, 1865. He was only 35 years old, but he seems to have made a distinctive mark, not least for fans of Hartlepool FC.

Lyrics: Who Hung The Monkey

In former times when war and strife
From o’er the channel threatened life
When all was ready for the knife
To watch the Frenchmen funky-o
The fishermen with their courage high
Seized what they thought a real French spy
“Kill him”, says one, “up him to die”
They did and they hung the monkey-o

They tried each move to make him speak
They tortured Pug till he loud did squeak
“That’s French” says one, another, “Greek”
The fishermen then got drunky-o
“He’s hair all over” the wives did cry
“Oh, what un woman with him would lie?”
Wish fish guts they bunged up his eyes
Before they hung the monkey-o

“Hammer his ribs, the thundering thief
Pummel his pate, man, with yer neef [knife]
He’s landed here for nought but grief
He’s old Napoleon’s uncky-o”
To poor Pug thus all hands behaved
“Cut off his Jimmy” they rowed and raved
Then one cries out “He’s never been shaved”
Before they hung the monkey-o

Then they put him in a grid-iron hot
The monkey then quite lively got
He grinned his teeth at all the lot
And rolled his eyes quite spunky-o
Then a fisherman up to poor Pug goes
Saying, “Hang him now to end his woes”
The monkey flew and bit off his nose
So it’s off to the Moor with the monkey-o

But let us hope that on the sea
We might maintain our dignity
May France and England long agree
And never get so funky-o
As for Pug, I’ve had my say
And former times have passed away
Still they cry to this very day
“Boys, who hung the monkey-o?”